Posted on December 28, 2016 by radamdavidson

I was raised on a steady diet of Star Trek reruns.  Late night, early morning, within the haunts of syndication, the crew of the Enterprise and I fearlessly coexisted, encountering one menacing adventure after another.  For the intrepid crew, it was the Trouble with Tribbles. For me, it was Trouble with Tater Tots, which served as the cornerstone for my school lunch from 4th grade on and which demanded an inordinate amount of ketchup that couldn’t emerge from those little packets fast enough.  But Captain Kirk handled it, and so did I, yet it was truly me doing my own stunts.  The whole time!

Now that I’m happily married and happily parenting, I encounter a new adventure that my Trekkian upbringing didn’t prepare me for: Star Wars.  I find myself in a family of Star Wars super fans, of which I am the uninitiated newbie who has been put in charge of carrying everyone else’s coats.  Because of how my wife was raised, she wife can paint a vivid story arc, punctuated by historical references and character developments that (I assume) are true to the SW canon.  Our sons can do the same, maneuvering effortlessly through all the references to planets, spaceships, and the subtle differences between a StormTrooper and a SnowTrooper.  As it turns out, it’s not that one kind wears thermal underwear.

And this is just one example of many unwelcome questions that I posed during an intense tutoring session following our family’s first screening of Rogue One.  Presented in stunning IMAX, we were all entertained and enthralled, albeit for different reasons.  For my wife and our sons, it was the completion of plot holes, pre-hsitoric elements that magically tie in to the grand narrative, and all the classic characters that they’ve come to anticipate.  For me, it was a mix of 3D wow and 3D confusion.  I can honestly say I got about 20% of it.  Maybe 25%.

After the floating credits floated away, we left some of our IMAX glasses behind and caught a very late dinner at one of the few restaurants in the city that were still open.  There, at the table in the corner, the four of us ate as we compared notes.  And I  started asking more questions.  Questions like: what’s the deal with people not being able to breathe?  Is that guy with the oxygen mask an early Darth Vader?  And that’s when the thrashing began.  My first job was to convince them that I was serious and that I really am that thick.  It got better after that.

In my defense, we all agree that Darth Vader is the one with a breathing issue, right?  So imagine my confusion when this movie had a different guy who breathes with a thing!  And why did they call the robotic moon a DeathStar — kinda sounds like a bad concept car model.  Ralph Nader would have a field day with this one!  But no, this is a planet they built to…what?… kill other planets?  Why?  What kind of infrastructure supports such complex systems?  And who put these people in charge, anyway, and what’s motivating them?

Thankfully my wife and our older son are very encouraging, answering my inane questions with great skill.  Master teachers, both of them, with the youngest offering color commentary that often brought greater clarity.  When I asked “who’s paying for all this?  Construction of the Death Star?  Weapons?    I mean, the overhead for staffing alone must be astronomical!” our younger son said “George Lucas is paying for this, Dad.  All of it.” 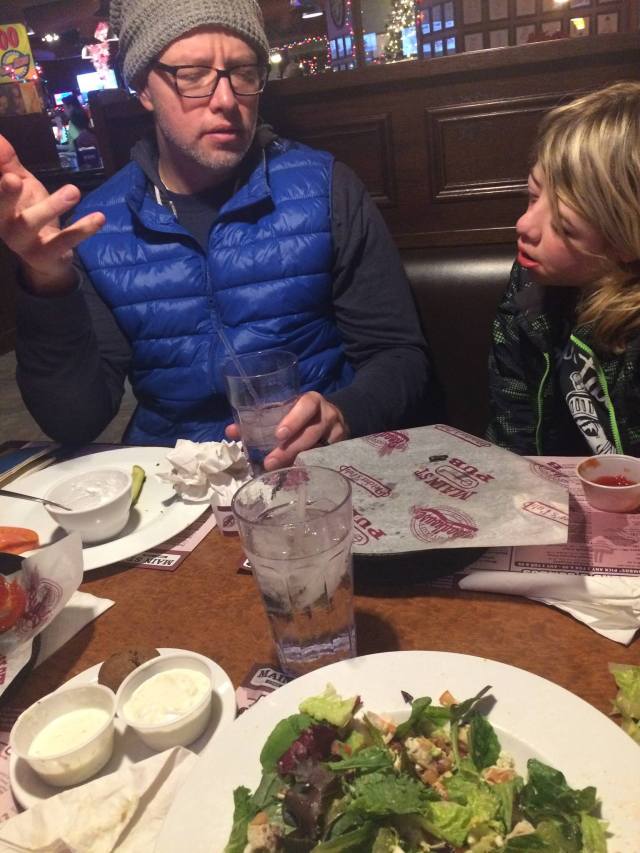 At this point, I was asking why Darth Vader always chokes his subordinates instead of encouraging them.

What can I say: I wasn’t raised on this.  I have one space sci-fi category, and it involves transporters, photon torpedos, vulcans and balding captains.  In my limited mind, everything has to go through StarFleet.  I realized halfway through the movie, as I was putting my Star Wars experience through a Star Trek lens, that there’s a marked difference between the two that I hadn’t seen before.  I’m sure others have, but it was an epiphany of sorts for me.  And it goes like this:

In Trek, the good guys are the organization — the “military” of sorts — the government — the UN.  Etc.  We root for these guys and roll our intergalactic eyes at the rebel Klingons, the fools.

In Wars, the good guys are the rebels and the bad guys are the ones with an Org chart.  We hiss at the government/organization and cheer for the ones who don’t wear uniforms.

So then I started thinking… what does this tell me about my preferences?  That I like rules and dislike rebellion?  That I’m not a fighter and that I value order over doing the right thing?  That I maybe should’ve spent less time rewatching the one about the Whales and instead given Return of the Jedi a shot?

Who knows.  I sit here, pondering in these final days of December, the cold of winter pushing into our lives, and I wonder: should I spend the next calendar year learning everything I can about Star Wars?   Could I become a superfan?  And would this help me bond better with the rest of my family?  Perhaps.  But that sounds like a lot of work.  Then again, it could be worth it.  I’ll think more and get back to you.  I will especially enjoy the teaching of the wise one, our an 11 year old that has the patience of a monk as he teaches me what truly is — whatever that may be.

Until then, my precious: beam up the force, check out the tardis, and don’t trip over the horcruxes.

When I'm not blogging, I'm hanging out with my family, pastoring a church, or listening to vinyl. I think and write about Jesus, music, communication, organizational leadership, family whatnot, and cultural artifacts from the 1980's -- mostly vintage boomboxes. You can read my blog at www.radamdavidson.com, watch [RadCast], a daily 3 minute video devotional, or find me on socials (@radamdavidson). I also help Pastors in their preaching and public speaking (www.CoachMyPreaching.com).
View all posts by radamdavidson →
This entry was posted in Family, movie review. Bookmark the permalink.