Posted on April 5, 2010 by radamdavidson 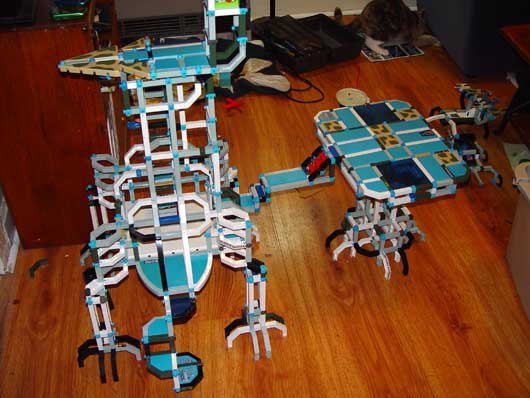 CONSTRUX, hereafter referred to in the less shouty construx, was another example of plastic injection molding technology that found its glory in the 80’s. Fisher Price introduced construx to the world in 1983, enabling kids to build any number of things, which for me was a wide variety of both squares and cubes. I later graduated to building cars which were basically squares and cubes with hastily attached wheels. There was simply no end to what you could build, provided your aim was bewheeled squares and cubes.

This says less about construx and more about my lack of creativity.

Construx has been compared to tinker toys and erector sets, but with a twist: you can still buy tinker toys and erector sets today. Construx, on the other hand, has found its way to every garage sale that I’ve never been to. Oh, I’d like to put down a shiny quarter or two and pick up a set of plastic beams and panels for the little Davidsons to play with, but alas… they cannot be found. There’s always eBay, but I like to play my chances close to home.

An even more complete find would be the yellow construx travel case used to store the beams, panels and other plastic parts which are the same size as the diameter of a 2 year old trachea. Storage is key, since if you don’t store them, your mom might step on one too many of these little blue six-sided cubes used to connect all the parts and say a six-sided phrase that can’t be repeated in 3rd grade — I can tell you that much.

When I'm not blogging, I'm hanging out with my family, pastoring a church, or listening to vinyl. I think and write about Jesus, music, communication, organizational leadership, family whatnot, and cultural artifacts from the 1980's -- mostly vintage boomboxes. You can read my blog at www.radamdavidson.com, watch [RadCast], a daily 3 minute video devotional, or find me on socials (@radamdavidson). I also help Pastors in their preaching and public speaking (www.CoachMyPreaching.com).
View all posts by radamdavidson →
This entry was posted in Uncategorized. Bookmark the permalink.